Using a "leg theory" approach, and the English desire to win by hooking, Dhoni won the 2nd Test against England.

Could it work for you too?

In certain situations, you can use a similar tactic. It's risky, but Dhoni and Sharma proved that it can win you games when orthodox tactics are seeing you cruise to defeat.

Lets look at the details.

The ball was old and not swinging. England batsmen Root and Ali had cruised to a hundred stand and needed another 150 or so to win. It was looking shaky for India.

Most captains would have sat back, told everyone to stay patient and hoped for the best.

I'm sure you have seen that happen many times in your games.

But Dhoni had other ideas.

He brought on Sharma - his fastest bowler - and set a field with a short leg, leg gully and men catching on the boundary. 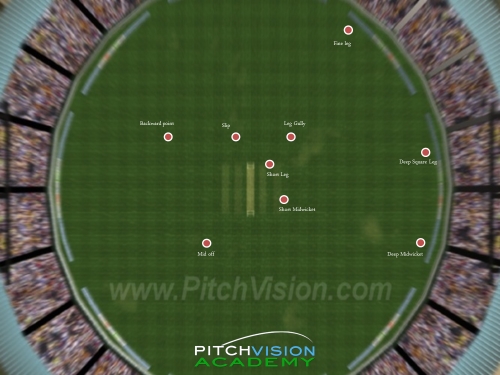 He told Sharma to bowl short and at the batsmen.

Over the course of the next 13 overs England hit a lot of fours. They also lost Prior, Stokes and Root to mis-hit hooks and pulls, while Broad and Ali went fending off short ones.

Can leg theory work for you?

Of course, bowling like this at lower levels is not quite the same, but you can still make it work.

Imagine that you are up against two set batsmen, who need 150 to win in plenty of time. You need to bowl them out to win.You don't have a really nasty fast bowler like Sharma.

You could keep pitching it up on off stump and hoping.

Or, you could find a bowler who can bowl a bouncer (it's not as tough as you think, you only need enough pace and bounce in the pitch to get the ball above chest height, it doesn't need to be going at 90mph) and dig everything in short.

It's a risk, especially as there are plenty of other tactics you can try. That said, knowing you have another tool in the box at your disposal is always a good thing.

Boundaries will be hit. Catches will go up. It's impossible to hit down on balls at shoulder height, whatever pace they are. So get some safe hands out on the leg side boundary and have some fun.

You might just be hailed as a tactical genius.

Great insight and excellent stuff. Love to read more.
Thanks.