How to Bat Against a Ring Field | Cricket coaching, fitness and tips

How to Bat Against a Ring Field Picture the scene: You walk in to bat. A medium pace bowler stands at his mark while you take guard. You look around and see the classic ring field: everyone saving the single.

It's a wall on both sides.

How are you supposed to rotate the strike?

How can you hit boundaries when there are fielders bearing down on all sides?

I would hazard a guess that this field is one of the most common in club cricket, so almost everyone will come up against it. You see it as standard in age group cricket, and it comes up any time there are slow pitches and limited over formats. Of course you may see a few variations on the theme: a third man instead of extra cover, a catcher in front, or fine leg saving one. The basic theory remains the same.

Make you do something crazy from frustration.

Here is how you release the pressure without having a big slog. (I know, it's tempting).

Look at the green

A very fine West Indian batsman once told me that hitting the ball into the gaps is easy. You simply look at the huge green spaces and ignore the relatively tiny blobs of white that are fielders.

You might argue that this is because he was a a very fine batsman and can thread the ball through the eye of a needle, but I say that anyone can use this trick.

When you realise there is much more green than there is white, you can aim for it. Wait for the half volley and aim to hit it between mid off and extra cover, or midwicket and mid on rather than through them. You might not do it as often as a great player, but the shift of focus is enough.

Simply remembering that fielders can't build a wall, no matter how good they are, will give you confidence and freedom.

There is always a gap

On top of this idea of gaps between fielders, is the reassuring knowledge that there will always be a space. Even the tightest ring field can't plug every gap because 9 fielders is not ever enough.

In our diagram above you can see about as tight a circle as you can get. Yet there are options:

Of course, the bowler needs to serve you up balls to hit in these areas, but he almost always will in the end.

So take a moment to pick a couple of safe scoring areas (or "shots" if you prefer more traditional terminology) before you take your first ball.

Hit over the top

Finally, you have the biggest gap of all: the vast area behind the fielders.

I know all classical batsmen hit along the ground, and you want to look as stylish as Tendulkar with everything on the turf. You can still do that, and before you do, why not make it easier by getting a couple of men out of the ring by going over the top?

Here are your options:

All these shots are, with practice, safe and effective when the field is up. You don't need to clear the boundary, you only need to get it over the fielder's head.

Once is usually enough to get a player or two out of the ring.

And that is the real secret of batting when the ring is bering down on you: All you need to do is play a couple of effective shots past the fielders. You see wider gaps opening up as the captain decides to protect the boundaries.

It's easy - while the pressure is on - to get frustrated that you are "wasting balls" if you block a few then hit a clean drive to a fielder a couple of times. You feel time ticking and you are not scoring. When you have that moment, remember that this is exactly what the bowler want you to feel. So release the choke, reset, reconsider your options and get back to batting with freedom. 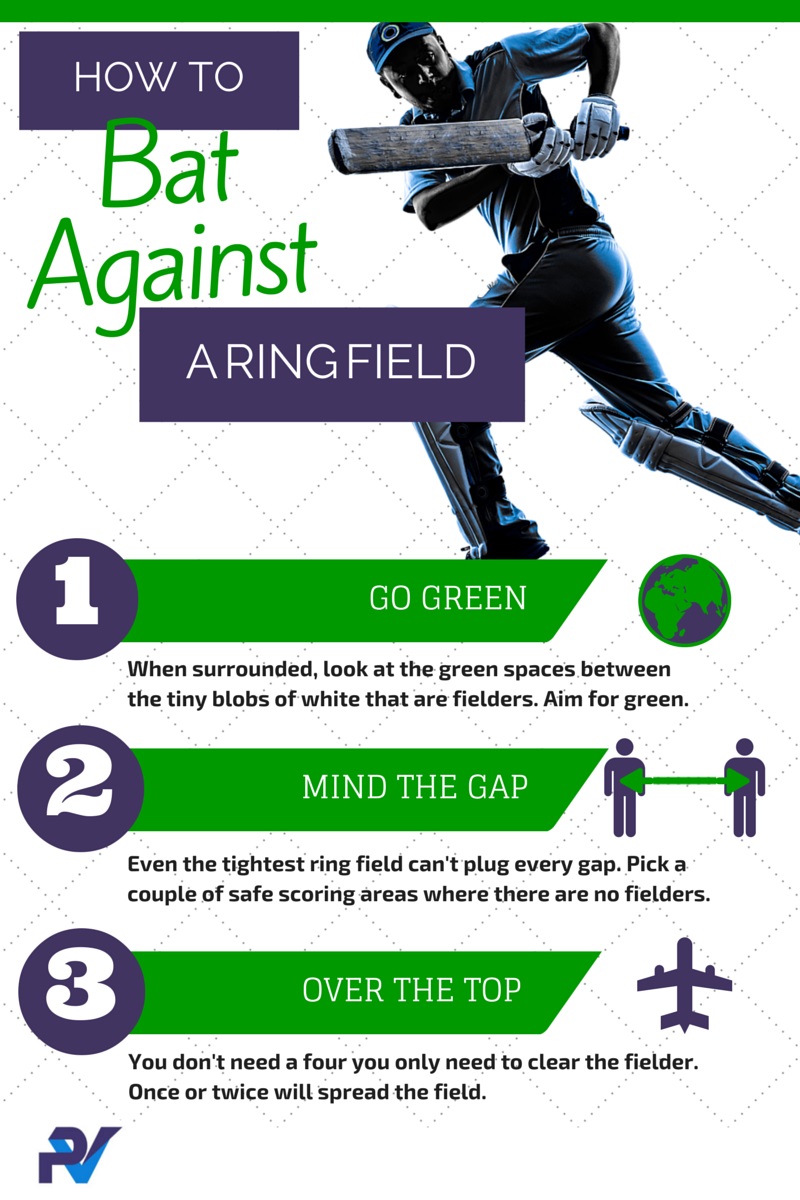 As you say, one of the best tactics against this field is to bide your time, maybe steal a few singles, but mainly wait for a hittable ball and hit it clean and hard over the top. My personal preference is to wait for a nice juicy half-volley outside off stump and put it clear over extra covers head.

Hopefully, the opposition will drop a few men back and you can relax, you now have some nice big gaps to hit into for stress-free singles. We talk about how a few brave shots early on will "earn" you the gaps for easy runs. After that, batting is far easier.

Good point AB. I would add that sometimes you go in and you don't have the luxury of too much time to get set. Even in those moments there are things you can do (although you do usually have more time than you think, even with 5 overs to go).

If only I had read this before Saturday...