Coaching to Win: An Emotional Time

The first week of July is always a week of mixed emotions for me at Millfield.

Sad because we say goodbye to so many fantastic pupils who leave the school after 5 years of relationship building, sharing highs and lows and putting in a mountain of work in the cricket bubble, the performance gym, the grass nets and on our awesome cricket grounds.

I was handed this fantastic farewell message from Max. A lad who has spent 3 years with us and now heads to University to pursue his academic goals as well as his cricketing passion.

This card is now on my pin board at home. Thankyou Max. 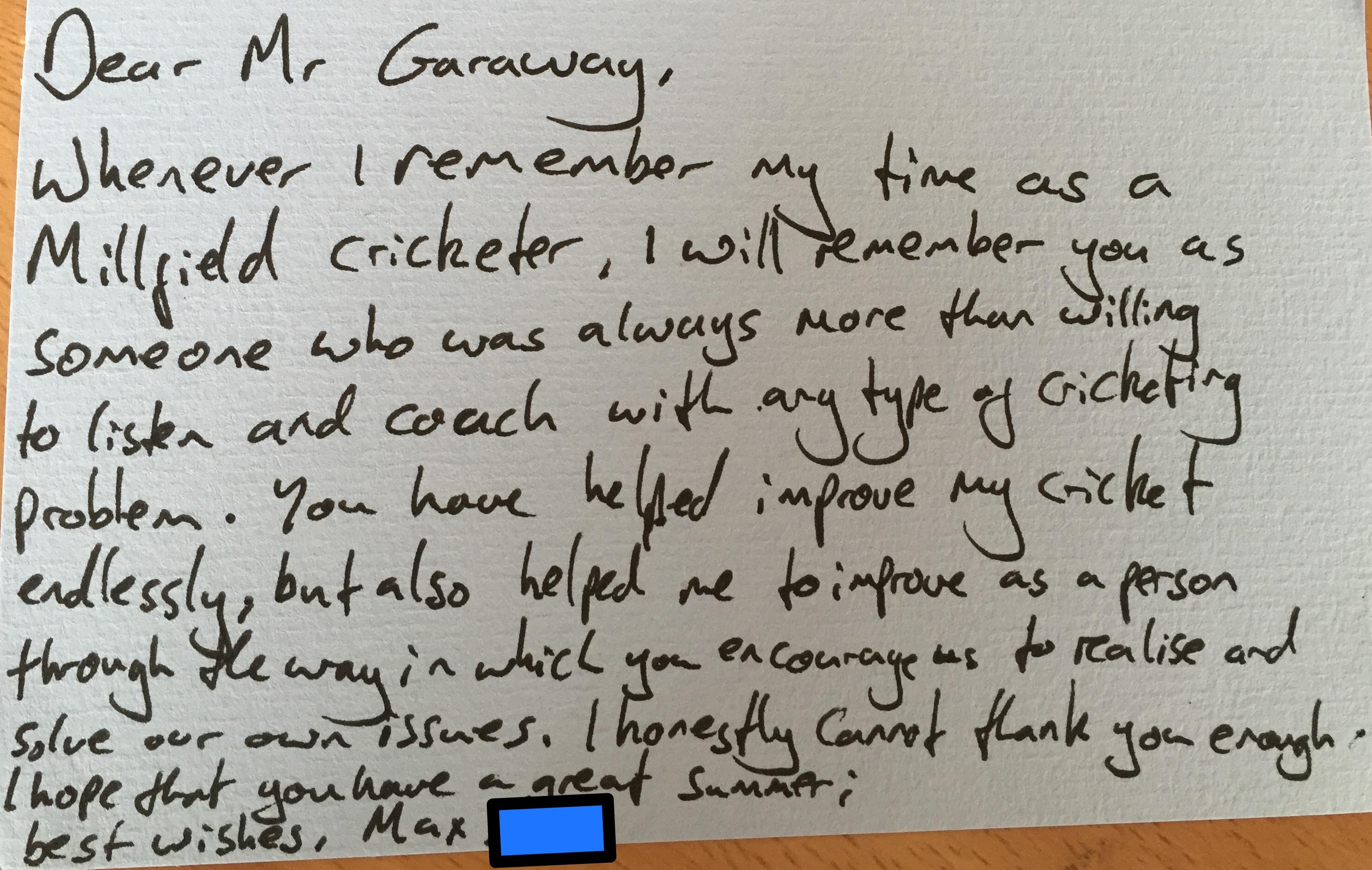 As a coach, you hope that you have a positive influence on each and every player in some small way, whether it is as a cricketer or as a person.

A good cricket programme - and a good coach - supports all cricketers, irrespective of age, gender or ability. The intention is to help pupils to improve, to enjoy the game, to develop a deep lasting passion for the sport and most importantly, to help them to become a great person.

It’s been a great year to date for Millfield cricket, possibly the best ever: A massive thank-you to all the great people who have played, coached and supported us through the last year.

Now for the bit that makes me happy

Seeing the team's achieve as a unit.

We have had a fantastic term with the teams at school.

The Meyers XI (our most senior boys’ team) won the U18 National T20 Cup. They have been a great bunch to work with over the past few years and worked their socks off under the leadership of Tom Lace (Middlesex). Millfield Under 15’s have qualified for the Arundel T20 National Finals Day on the 4th September. They are looking to defend defending the trophy that was secured in 2015.

Millfield Under 17’s (the Atkinson XI) also have their National Cup Semi Final on the 1st September.

Now for the second bit that makes me happy.

Watching the individuals thrive in the summer holidays.

It’s great having a National Competition presence but I get even more excited about the progression of individuals over the summer holidays.

England have just announced their U19 Test, ODI and Development squads.

Tom Moores (Nottinghamshire) joins the two “George’s” in the England ODI Squad and Josh McCoy (Hampshire) has been selected for the ECB Development XI.

It's really exceptional news for the school to have four players in the England U19 Squads. All four boys have been so committed to their development over the past few years and richly deserve their selections.

Next week I will head up to the Bunbury Festival and watch the Millfield U15 Captain, Sam Young, play for the West of England. It’s going to be a great week for so many aspiring young cricketers, an opportunity to really put their names on the map.

Batter/Keeper Fin Trenouth had a couple of reasons to celebrate last week. Fin was awarded his Somerset CCC Academy contract after working incredibly hard in his first year at Millfield. Fin then capped the week by breaking the ECB U17 County Championship batting record, scoring 332 not out (out of a team total of 477 all out) against Hampshire U17s at Basingstoke.

George Bartlett celebrated his England call up with his maiden County 2nd XI ton. He scored 150 runs against Yorkshire CCC at Headingley. A top player.

From the players who have sampled cricket for the first time this year through to the lads taking on Sri Lanka U19s in various formats over the coming weeks, the 2016 Millfield Season has been a belter for one and all.

Keep up the good work everyone!