Stay Focused During Boring Nets with a Competitive Edge I was chatting to Matt Dawson - Head Coach at Cricket Asylum - about the problem of young net bowlers "messing about".

I'm sure you recognise this: The session starts well but as attention span wanes, young bowlers tend to start entertaining themselves. The try to distract each other, run in while finishing a conversation or decide to "bowl leg spin" all of a sudden (and it goes into the side netting).

Of course, fun is a key aspect of training - especially in teenage players - but training time is limited and for most the goal is also to get better at cricket.

So how do you deal with it?

We all know instinctively that adding competition to a situation helps you stay focused. You just have to see the difference between training and a match to see that. So why not make training into a game too?

During the Cricket Asylum Summer Elite Academy, Matt took the time to set up PitchVision in a net with bowlers and batters. The players could now see how they were "scoring" and it made the net instantly more competitive. 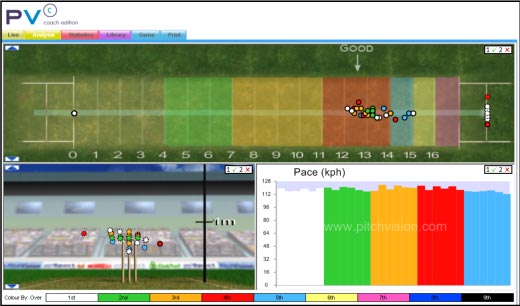 The difference was more than just theory.

Matt reported that players who were distracted quickly in "normal" nets stayed focused throughout their gamified net.

Plus, with PitchVision's ability to upload the data and spot both process and outcome elements, the young players had something specific to think about and wok on between sessions (and on into the winter).

Of course, PitchVision is just one - albeit very efficient - way of keeping focus. (Kids love technology at all ages and abilities.) There are many other, lower tech, examples of making nets into a game:

With all these, the key element is simple: competition equals focus. When you put something on the net, it becomes less boring, more engaging and helps players improve as well as having fun.

One simple option is to divide your group into two. One group bat, one group bowl. The group that are batting do some work in the nets and some work on throwdowns somewhere out of the way. They don't talk to the bowlers.

The group that are bowling get a short, intense, focused workout, and then stop. 2 or 3 bowlers per net only.