On the surface, an open stance is an excellent way to play. It gives the batsman a balanced position from which he or she has a wide range of scoring options.

But it can also lead to their downfall, if you know how to read it properly.

Batting with an open stance is when the batsman moves his front foot, or shoulder, or both more towards the leg side like this: From this position, a batsman has good access to the straight ball and can usually play straight and through the on side very well with front and back foot drives.

This position also lines the batsman up for bowlers bowling around the wicket (or left arm over).

There are a couple of flaws that can be exposed:

First, the open stance means it takes more work hit on the off side. The batsman has further to go: Second, the stance may be a response to a batsman who has had a problem with being too closed off in the past. Old habits die hard and you may see them automatically stepping to the off side as a kind of trigger move.

This causes the player to become closed off again with the same problems.

How to bowl to an open stance batsman

The first thing to do when you see an open stance is to find out if it's really a closed position in disguise and the batsman is stepping to the off side even though he starts from an open position.

If the batsman is guilty, then switch your tactics to the same as a closed stance.

Assuming the batsman is not closed off and is playing in a well balanced and open way he will be:

It can be away swing, seam movement or spin, the more open the stance, the harder the batter will find it to get his shoulder round from an open position to an off drive position.

The classic 'corridor of uncertainty' is best used here because the open stance batter is even more uncertain in this area that other stances ,meaning he or she is more likely to edge the ball: Movement is important because just bowling wide outside the off stump straight will lead to the batsman leaving it or getting used to the tactic and playing confidently through the covers.

If the ball is not moving much you could adjust the angle by going around the wicket (right hand bowler to right hand bat). This will naturally move the ball across the open stance batsman, although it does carry an increased risk of the batman being able to play favourite on side shots more easily (with LBW less likely).

A second plan, if you have no away movement bowers or your strategy fails, is to bowl a straighter line at the stumps to the batsman's strength.

You then set a leg side field and dare him to get through: 5 or 6 fielders on the leg side with a couple of spaces to tease him into a shot over the top.

For example a medium pace bowler against a set batsman's field looks like this (although it's flexible): 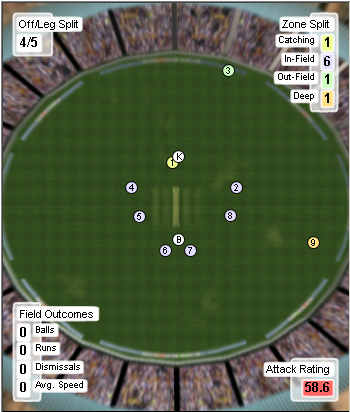 The trick here is that the batsman will be over-confident and think he can beat all your fielders because he can middle the ball.

However, remember he is still a club player and so can't get it right every time. You just need to let him think he has the measure of you and wait for the error.

I have just taken on the job of coaching under 12s. where do I start. i can only remember bits. I need a plan to get it off the ground. I have loads of drive and some good players but need gidance

Does anyone know what program is being used to illustrate the field setting with the attack rating, off/leg split features

Mat, it's PitchVision Coach Edition click here to get it for Windows XP.

can you get that for mac?

Lex, its not directly compatible on a mac- but we do know of if it being sucessfully run on a Mac running a Windows OS emulator, if thats any help. cheers

Its rlaley great that people are sharing this information.

Can you please make a field setting for this type of batsman when a Leg Spinner is bowling to him?

That kinda depends on the match situation. You can see our field settings database here: http://www.pitchvision.com/complete-guide-to-cricket-field-settings/

When spinning the ball away from a batsman with an open eyed stance, I find that because they tend to slog through the leg side, it's best to put it on a good length on leg or middle stump to tempt them into the shot.

How much running in 1 day 4 bowling and how much time i continously bowl ???

and also the run up and the action ???

How much running in 1 day 4 bowling and how much time i continously bowl ???

and also the run up and the action ???